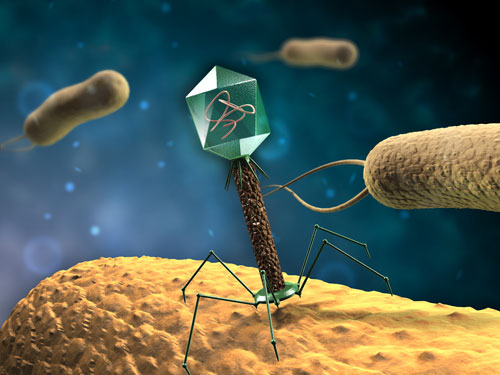 Balfour Sartor, an expert on inflammatory bowel disease at the University of North Carolina in Chapell Hill, is experimenting with Lactobacillus and Bifidobacterium gut bacteria, with the idea that they may have dampening effects on the immune system (New Scientists, August 76, 1999).

Probiotics enriched in lactobacilli have been proposed as an effective and alternative tool to antibiotics for the treatment of bacterial vaginosis. The protective role of H(2)O(2)-producing lactobacilli has been strongly emphasized, but no clear-cut correlation appears to link the metabolic characteristics of administered lactobacilli with the clinical impact of probiotic therapy. On account of our review of basic mechanisms involved in bacterial vaginosis, we suggest that lactobacilli with an elevated arginine deiminase activity could have a greater therapeutic potential than strains producing only H(2)O(2). Preliminary results from our laboratory have demonstrated that treatment with probiotics containing arginine deiminase-positive lactobacilli improves clinical symptoms and is paralleled by a significant decline of polyamine levels in vaginal microenvironment. This is of outstanding interest due to the central role of polyamines in the pathogenesis of bacterial vaginosis. We should critically rethink, against this perspective, the use of probiotics for the treatment of affected women (Famularo et al. 2001).

A substantial number of Bacillus species have been marketed for use in oral bacteriotherapy because of their purported ability to prevent or treat various gastrointestinal disorders. Recently, some of the Bacillus strains in Enterogermina, which is made up of aqueous suspensions of viable Bacillus spores, have been partially characterized and aligned with members of the Bacillus alcalophilus subgroup rather than with Bacillus subtilis, as previously reported. With a view toward verifying the original taxonomic position of the Enterogermina strains, we catalogued both phenotypic and genotypic traits exhibited by the four Bacillus strains isolated from the spore mixtures found in original commercial preparations dated 1975 and 1984 and commercial preparations now being propagated industrially. Analyses of physiological and biochemical traits, complete 16S rRNA gene sequences, DNA-DNA reassociation, tRNA intergenic spacer length polymorphism, single-strand conformation polymorphism of PCR-amplified spacer regions of tRNA genes, and randomly amplified polymorphic DNA led to the finding that all of the Enterogermina strains belong to a unique genospecies, which is unequivocally identified as the alkalitolerant species Bacillus clausii. Moreover, we provide evidence that in contrast to several reference strains of B.clausii, the strains constituting Enterogermina are characterized by a notable low level of intraspecific genome diversity and that each strain has remained the same for the last 25 years (Senesi et al. 2001).

Bacteria that cause typhoid or miscarriages are being manipulated to produce vaccines against deadly diseases, including AIDS. Loaded with fragments of HIV or other pathogens, the bacteria act as a radical new kind of cheap vaccine that can be swallowed instead of injected. If the vaccine causes any problems, antibiotics will destroy it. One such HIV vaccine, developed by David Hone and his colleagues at the University of Maryland Biotechnology Institute in Baltimore, is based on a weakened form of Salmonella typhi, the bacterium that causes typhoid ever. Hone hopes to start testing the vaccine later this year in Nigeria and Uganda. The other, developed by Yvonne Paterson and her colleagues at the University of Pennsylvania Medical School in Philadelphia, is based on Listeria monocytogenes. This bacterium can cause pregnant women to miscarry and triggers meningitis in people with weakened immunity. But otherwise it poses few problems in healthy people. “They are revolutionary vaccines, says Paterson, who has shown the vaccine works as planned in mice. She is now applying to test the vaccine in macaques (Coghlan Day, 2001).

The new concoctions have been dubbed Trojan horse vaccines.

Because the live bacteria invade and occupy white blood cells lining the gut. Researchers working with Salmonellahave chosen a strain which invades cells but is too weak to cause disease. Paterson hopes to find an equally benign strain of Listeria, but her initial experiments have used the natural strain.

Salmonella and Listeria have both evolved ways to hide in white blood cells without being destroyed. To turn them into vaccines against AIDS, the research teams have equipped them with genes from HIV.>

Proteins made by these viral genes are chewed up and displayed in the normal way when dendritic cells meet the altered bacteria. In this way, the immune system learns to recognise and attack regions of real HIV if infection occurs.

Tests on animals treated with the salmonella vaccine have shown that it can protect the mucosal surfaces where HIV normally enters the body, such as the cervix, vagina and rectum. It does this by producing antibodies and priming T cells. You get immunity at mucosal surfaces and that’s where HIV infects,” says Paterson.

Ray Spier, a vaccine specialist at the University of Surrey, says that the approach is exciting but fears that booster doses might be needed. Mucosal immunity is sometimes short-lived, just weeks or months instead of years, he says.

This information was found in the NewScientist.com (http://www.newscientist.com/news/news.jsp?id=ns9999372)